skip to main | skip to sidebar

It has been two weeks since I last posted on here, and I am sure that this poor blog thought it had once again been abandoned, as it has several times in the past.  However, I am still here!  I am still doing my thing.  I am still firmly on my journey!  My weight is up a bit, mostly due to some hormonal fluctuations, as well as one night of drinking some fun frozen drinks (the alcohol/PMS bloat double whammy was not kind to me on the scale), but today I stand here fully committed to working to reverse that trend on the scale!

I have decided that if I want to become a runner, I have to realize that all the time in the world on the elliptical will not make me into one.  I restarted the C25K program today, and I started with W3D1.  I had made it to W4 last time around, but I decided to step back a week because I wanted to try going a teeny bit faster.  I have been comfortably walking on the treadmill at 3.7 or 3.8 MPH for the past few weeks, and I wanted to make my goal for the walking portions of the program to be more in line with that speed.  When I started C25K, I was running at 4.3 MPH and walking at 3.3 MPH.  Now, part of my cool down is done at 3.3 MPH, so it seemed silly to have any of the main part of the workout be that slow.  Today, I did the run portions at 4.5 MPH and the walk portions at 3.7 MPH.  The walking still felt a little "easy" to me, so I might kick it up to 3.8 MPH tomorrow.  However, the little difference in the speed of the running portions was a nice challenge, and I am going to stick with that for now.  When (note I said "when," not "if") I finish the full program, I will work on increasing my speed a little at a time.  My goal is really only to run at a 5 MPH pace until I am closer to my goal weight.  Once I am leaner, I feel my speed will probably naturally pick up.

I did overdo today, however.  After my 30 minutes on the treadmill (including my C25K workout and an additional two minutes of walking), plus a five-minute cool down, I got on the elliptical for twenty minutes of intervals plus a five-minute cool down.  When I was done, I felt AMAZING.  Tonight was my yoga night, and I was really looking forward to that as well.  However, tonight was my first intermediate yoga class after a year of beginning yoga, and although I didn't expect there to be much difference in the two (it's the same instructor, and she has progressed us over the course of the year, so the beginning yoga class has become more challenging as time has gone by), this class was MUCH more challenging that the old class was!  It's a hatha yoga class, and the main difference, I think, was that we held the poses for much longer, and I felt some amazing burning in my muscles in some of the poses that will surely lead to soreness tomorrow.  I don't think I will be doing an hour of cardio on my yoga days anymore...I will stick to either the treadmill or the elliptical for about a half hour and then let the yoga class finish out my workout.  I am excited about being challenged in my yoga practice, however.  I have seen a major difference in my strength and flexibility over the past year, but I still have a long way to go.  It was time to move on to a new level, and I am so happy that our usual instructor is offering this new class!

The eating has, for the most part, been going pretty well.  I gave up fast food for the month of July (I was also supposedly giving up retail spending, but I failed in a major way thanks to some coupon codes that came my way), and I have not broken down on that at all, which has been huge for me.  I have had some food out, but none of it has come from a drive thru.  I have had Wawa sandwiches a couple of times, and I have had Saladworks a time or two, but I have not had McDonald's, Sonic, or Chick-fil-a since June.  I have also been enjoying the abundance of local produce out there.  We have some farm stands very close to our house, and I have enjoyed exploring to see what they have.  I have also been buying organic or local or (preferably) both at the grocery store, and I feel so much better about what I am putting in my body.  Two favorite purchases this week were organic strawberries and cherries at Wegmans...I devoured them both in three days time.  I am also excited that the local tomatoes are ready...I enjoyed a tomato with balsamic vinegar as a snack today, and it was amazing!

Those of you who read my sister's blog should know that she has a birthday coming up in two days, and it's a big one!  I am not able to be with her for her 30th birthday, but I am going up to visit her the following week for a couple of days.  She lives somewhere that has both a Whole Foods and a Trader Joe's, and I am planning to head up there with my entire grocery budget and a cooler and stock up on a few things.  I mostly want to look for some organic meats, as I am having trouble find easily accessible options here.  Wegmans was carrying organic chicken thighs that I was enjoying (and they were only $4.99 per pound, which wasn't breaking the bank), but they have not had them the last few times I was there.  I will be so sad if they are gone forever, as they were my major meat source!  I might have to break down and order the expensive organic chicken that one of our local farmers offers in partnership with another farmer she knows.  She takes the orders and gets the chicken delivered to her farm, and people pick it up from her.  I would probably have to up my food budget a bit at least one pay per month to cover the cost, however, as you have to buy in larger quantities, and it's not cheap!  It's such a balancing act to decide if you just want to cut back on meat altogether or just pony up the money for this stuff!

Alright, if you are still reading, I commend you.  I hope that everyone is having a great week!  And as always, remember to make it a great day!
Posted by MC at 6:28 PM 1 comment:

The End of the Challenge

For about the last ten weeks, I have been taking part in a Biggest Loser-style challenge set up by a friend-of-a-friend here on the Internet.  It has been interesting to be working toward a goal like that, and I thought that my competitive spirit would really drive me in my efforts over those ten weeks.  Interestingly, while I did well the last ten weeks, I wasn't quite as obsessive about is as I thought I would be.  And I think that's a good thing because I am looking for lifestyle changes that I can live with in the long term, and making some sort of crazy efforts for ten weeks really might have led to some burnout.

Anyway, here are my stats for the challenge:

In ten week, I lost exactly 18 pounds!  I was pretty happy with this, especially since I had a week of no loss and a week with a small gain.  The final results have not been posted yet, but I expect to be somewhere in the middle of the pack, which means I won't win any money.  However, I feel like I won in that I stuck in for the entire challenge and met with some good success!

I posted a "before" picture here when I started the challenge, and for reference, here it is: 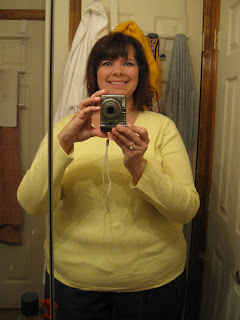 And here is the "after" picture that I posted on the challenge board: 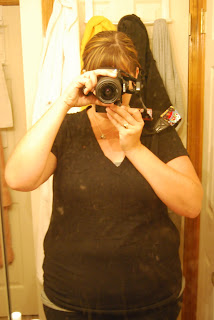 All the lumpiness is there in the same places, but I can definitely see that I am narrower across the beam.  I was happy to see such a difference in the photos because sometimes it's difficult to notice such differences in the mirror from week to week.  I think I might plan to take another picture in another ten weeks to gauge my progress.


I am setting some new goals for myself in the gym.  As I detailed here, I started the C25K program a while back to try to get back into jogging.  After about six weeks doing the program (during which time I completed the first three weeks twice each), I went on the elliptical one day and then never looked back.  However, my original goal was to become a runner again, and I don't want to lose sight of that goal.  At the gym yesterday, I got on the treadmill to see if I could run a mile.  I made it a half mile and then stopped, although I probably could have pushed myself to go longer.  I did follow it up with some speed walking and was on the treadmill for a total of 24 minute, after which I got on the elliptical for 33 minutes.  In all, it was a great workout, and I want to keep doing this so I can build up my running endurance.  I might pick up week four of the C25K program at some point, but for now I am just going to hit the treadmill before the elliptical each day and see what I can do.  Once I get to a mile, I feel like I can keep adding time and distance without following an interval program.  If I find this to be untrue, however, I have C25K to fall back on and will certainly get back to it.
Yesterday was a day of excess, with two picnics on our agenda.  I definitely enjoyed myself, but I am definitely ready to get back in the swing of things.  I started the day my making a big pot of steel cut oats for the week, and after I eat some of that and let it sit for a bit, I am headed to the gym.  Because I had yesterday off for the holiday, I have to work two weekdays this week, so my gym schedule will be messed up a bit.  I want to get in a good workout today for that reason.  Our yoga class doesn't meet tonight either because of the holiday, so I am planning to do a yoga DVD today to replace the class.  It should be a full day!
Make it a great day, everyone!
Posted by MC at 7:38 AM 1 comment: